Capt. John Hoyte, born in 1955, has had a lot of diversity in his flying career: from crop spraying to fire fighting, from cargo to passenger transport, on many different aircraft types. Starting 1990, he developed more and more health issues, which eventually forced him in 2005 to prematurely end his flying career. He appeared to be one of many victims of  the Aerotoxic Syndrome. In the Aerotoxic Association, which he founded in 2007, he has been fighting ever since for recognition of this serious illness, and to enforce proper measures to be taken by the airline industry to stop the contamination of cabin air by a.o. toxic oil fumes.

His book “Aerotoxic Syndrome – Aviation’s Darkest Secret” tells his story, and it’s definitely worth the read! It is obtainable via this link to Amazon.com.

See below for the information provided by Amazon.com about the author and the book. 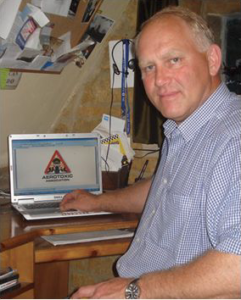 John Hoyte was born in 1955. He was a professional pilot for nearly 30 years, working in aerial crop spraying and fire fighting, as a public transport pilot of both freight and passengers, and a flying instructor. However in 1990, while flying the BAe 146 airliner he succumbed to mysterious ill health, which led him to take premature retirement on medical grounds in 2005. In 2006 he became aware of aerotoxic syndrome, and this led him on a voyage of discovery, working with scientists, doctors and other aircrew to have the illness formally recognised and known solutions implemented. He founded the Aerotoxic Association in 2007. He lives in Norwich, and has two wonderful children. 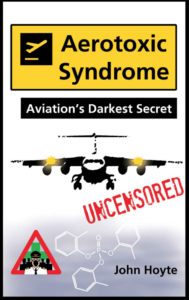 In 2005, after enduring 16 years of physical and mental harm caused by his job as an airline pilot, John Hoyte’s career was ended by a chronic illness. It took a year of research and networking with other mysteriously grounded aircrew to obtain a diagnosis of his debilitating symptoms.

Aerotoxic Syndrome is aviation’s darkest secret, yet the cause of this toxic illness has never been formally accepted – despite it doing incalculable damage to aircrew and passengers’ health for over half a century; exposure to deadly neurotoxins that leak from jet engines into cabin air makes countless flyers seriously ill, and has led to some deaths.

But there is huge pressure on the aviation industry and its government backers to systematically deny its existence. Solutions exist for this problem but the industry would rather avoid the expense of adopting them.

Hoyte draws on his experience and that of many other professionals to reveal a compelling parallel between the tobacco and aviation industries, where basic health & safety principles are ignored, whilst profit is made at the unquestioning public’s expense.

This frank layman’s account is required reading for all those who fly in jet aircraft.

Decide which is the greater scandal – the poisoning or the cover up.