Porter Lafayette has flown for more than 32 years for some of America’s leading original legacy carriers. He had to end his career as a consequence of Aerotoxic Syndrome. Today he is still active as a writer about aviation, in particular about the problems with contaminated cabin air. His latest book “FUME EVENT – Aviation’s Biggest Lie” can be obtained via this link to Amazon.com.

Below is the information that Amazon provides on their website about the author and the book.

Porter Lafayette has flown for over thirty-two years working for some of America’s leading original legacy carriers. His travels have taken him all over the world until he became too sick to continue doing the career he had done for his entire life. He is a dedicated and passionate Health and Safety Aviation activist that is committed to accomplishing his life goal in obtaining a first ever comprehensive Cabin Air Quality bill for aviation in America. 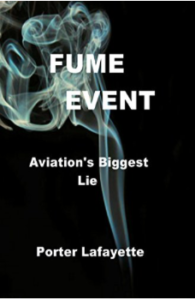 An aviation documentary book that examines the details of secrets and lies airlines have been hiding for over 60 years. When you travel on an airplane and you suddenly, for no reason become violently “Air Sick”, or after coming home you have headaches, disorientation, migraines, and fatigue. Then you could be suffering from a poisoning. The airlines try to tell you that this is just “Jet Lag”. The truth of the matter is that it is often neither. More often than not you have been poisoned by the Cabin Air on your flight from engine vapors that include Neurotoxins such as TCP Organophosphates. This can lead to chronic illness, disable you mentally and physically and even cause death.