Authorities and industry are too close (risk of conflict of interest). New aircraft must be designed without the use of bleed air for cabin air supply. Existing fleet must be equipped with filters ans sensors. The technique is available, but the airlines fear huge financial claims.

After 20 years Janet was forced to end her flying career due to health issues: balance problems, tremors, memory problems etc. It’s time to end all the denial, time for action.

15 years of experience, represents AVSA (France). AVSA has 4 teams of legal advisors to support their members in court and agressively fight negligence, care for victims, civil cases of social security. Now is the time for action!

Unite the union is presently involved in 57 court cases in the UK. On one hand, the industry recognises the need for filters etc., on the other hand they consistently deny the whole problem, together with the regulator. Legal action faces several difficulties: experts have to be absolutely neutral for them to be accepted in court, consistent reporting of incidents is crucial: no report = no problem! Watch his presentation below

Undereporting: existing checklists not always suited for fume events (terms like “IF SMOKE/FUMES BECOME THE GREATEST THREAT”… what exactly does that mean?). No training/education about possible consequences, reason why fume events are still often perceived as a nuisance rather than a safety issue. Perception is individual. More focus and training is needed to increase awareness of the dangers of fume events.

Henry Raddal already warned in 1955 for the risk of pilot incapacitation caused by bleed air. Nevertheless the system was widely introduced in the ’60s. Allowable levels of chemicals should be considered both separately and collectively (the combination can be far more toxic than the individual substance). The human nose desensitises after only 3 minutes, there is no other warning system. Ultra fine particles can cross the blood/brain barrier.

27 recommendations by the Australian Senate in 2000: compulsory monitoring, air filters can be made mandatory, crew and pax should have access to uncontaminated air. Regulators (CASA, EASA) claim that the evidence is inconclusive, therefore they feel not responsible and take no action. According EASA (2017), “chances of being exposed to a real fume event is very unlikely”. Chris van Netten (British Columbia Uni) designed a compact air contamination sampler. Almost all samples taken identified a problem. Working together with pilots this could provide more data to fight underreporting. See his presentation below:

Two options for the existing fleet: 1)detect and isolate contaminating components 2) Clean the bleed air. Where to detect? Preferably at the engine, so the contamination can be isolated. Contamination must be sensed in real time and at low levels (better than the human nose). Most suitable parameters for detection: Formaldehyde/CO2 or Ultra fine particles. The latter however require very expensive sensors, not really suitable for aircraft. Real time detection is technically feasable. Detection does not have to be exact, but usable. Further improvements will then become available as sensors are further developed. “You have to take the first step to get anywhere.”

Sensor needs to be more sensitive than the human nose, it does not measure absolute values but changes in levels. Does not measure individual components but a “fingerprint” to distinguish between e.g. engine oil, hydraulic fluid, de-icing fluid, plus a CO sensor. Sensor must tolerate exposure to/contamination with e.g. oil. Sensing preferably in ECS ducts. Limited lifetime for filters and sensors. First on ground testing of complete system finished successfully, first batch of systems expected early 2020.

Air pollution: smog in Londen 1952 led to Clean Air Act in 1956. Fine particles (PM 2.5) caused 4.2 million deaths in 2015 (5th mortality factor). They will cause cardiovascular and respiratory problems and lung cancer. Autism could be caused by prenatal exposure to Diesel fumes. The smaller the particle, the deeper it will protrude (into deep lung tissue, across lung/blood barrier, across blood/brain barrier). Susceptibility is depending on such factors as age, defence mechanisms and genetic constitution. 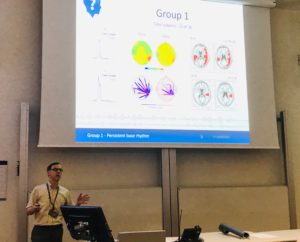 Presentation about his running research program into brain damage as a result of exposure to contaminated air in aircraft. Over 100 participants from around the globe, of which 30 (pilots, cabin crew, ground crew and frequent flyers) have been analysed so far, with consistently demonstrable damage in certain parts of the brain. Dumalin has access to a huge database of non-aviation related patients for reference purposes. The research will continue well into 2020.

The industry deliberately cause confusion and doubt for their own financial benefit. “Doubt is our product” (Brown & Williamson, 1969). Examples are the false information about e.g. tobacco, asbestos, alcohol, sugar, glyphosate etc. Mercenary scientists lend themselves for industry controlled research. By doing so, they damage the credibility of science, e.g. in the Diesel scandal.  “Chemicals are innocent until proven guilty” is the world upside down, that should be the other way around. Conclusion: there is more than enough evidence, and it’s time for authorities and operators to act.

Oil seals inherently leak by design. More leakage can be expected during power transients and in case of. damaged seals. Oil particles in contact with water (e.g. during a rain shower) produce extra toxic particles and “dirty socks” smell. Do not rely on reporting (because of known underreporting). Design requirements CS25.1309, CS 25.831 en CS-E 510 are not complied with. The solution is a Bleed free design, improved bearing design, filters and sensors, stricter legal requirements and their enforcement and awareness training.

Explanation of Cabin Air Contamination Event (CACE), explanation of the design of the oil system. Aircraft Maintenance Manual requires the complete cleaning of the air conditioning and the ducts after each fume event, but in daily practice this is impossible because of the many (sometimes narrow) ducts behind panels and above the ceilings. Applying hot air is not sufficient. The bleed air systeem is a poor design, bleed air should not be used at all for cabin air supply. Metal micro and nano particles enter the cabin with the bleed air and ultimately enter the human body. Engines remain under the wing much longer than before, causing more wear and more oil leakage. Oil residues remain in the air conditioning ducts. Contaminated air conditioning parts should not be cleaned but replaced. The industry is downplaying the problem, let’s go back to the cautious principle “safety first”.

Comparison to the asbestos scandal. Hopefully the industry will take their responsibility.

It is a legal requirement to report every fume event. The US authorities (FAA) however, has no central database to store these reports, and reports are being deleted after only 1 year! According FAA Accident and Incident Data System AIDS order 8020.11D, incidents that could have jeopardised safety must be retained.  After questions by the Senate, the FAA reported to have received no more than 18 fume event reports over the period of 2011-2017. Own research (based on the Freedom of Information Act) produced at least over 3.000 fume events over that same period in the FAA database! So FAA delivered false information. When asked about the 18 fume events, the existence of the documents was denied… A study by Byron learned that in the USA alone an average of 5.4 fume events occur every day.

A standard medical protocol is being prepared by GCAQE, written by an international group of doctors/scientists including two Dutch: Dr. G. Hageman en Drs. J.J. Midavaine. The protocol is almost finished now, has been peer reviewed en will be available as a (bulky) book. There will also be a compact quick reference document.

Presentation about various court cases in different countries. It is all about who wins in the end, not about who is right! In the end mostly the party with the most financial/legal resources will win. Per country there are large differences in legal procedures.

About his research into health problems with cabin crew on the DC10 and B747SP in the ’80s. At that time already, it was concluded dat the used engine oil was the most probable cause of the issues (Aerotoxic Syndrome didn’t even exist at that time…). Nothing much changed in 30 years, really…

Presentation about the BASF Ozone convertor, that converts Ozone (O3) into Oxygen (O2), this is a requirement on all wide body aircraft. BASF is also offering a version that includes a VOC convertor, which converts Volatile Organic Compounds (mainly removal of smells). Correct maintenance of the convertors is of paramount importance to ensure proper performance over its lifetime, this should therefore preferably be done by BASF.

Presentation about the development of PALL sensors and filters. Many problems occurred during the development, airconditioning system in aircraft is much more complex than they originally realised. In 2016 the Mist And Vapour Eliminator (MAVE) project was started, to remove water vapours and mist (containing ultra fine particles). At present the first (ground) tests with the complete system have been successfully finished, beginning of 2020 the first units are expected to be available. No orders are being taken yet, but various airlines around the globe are showing interest.

Presentation about Risk Management by airlines. “you can only control what you know”. Fume events are an emerging risk, that needs to be controlled to ALARP (as low as reasonably possible). Only then will you as a company be protected in court.

After a fume event in 2012 with a B757, the air conditioning ducts were found to be almost entirely blocked. Boeing’s cleaning procedure appeared to be insufficient. Icelandair now chooses its own cleaning procedures with shorter intervals. They recently had another fume event on a B767, 4 stewardesses are still on sick leave. The importance of correct reporting is emphasised. Icelandair uses Nyco oil on its B757, but this is not yet certificated on the B767. They also use the new PALL VOC filter.

After 6 months of flying (Bae146) she fell ill after a major fume event. She was misinformed about the cause of the fume event (found out much later that this was due to a major oil leak in left engine that required an engine change). After 2.5 years of legal battle this was settled in 2002 (14 months of wages) when the company went bankrupt. Then she started a court case against Bae and spent over GBP 40.000 on a new lawyer who gave up after some time. Another lawyer was then engaged on a no cure no pay basis.  Bae went to four different legal firms and delayed the process endlessly. After 15 years she was forced to give up after spending a total of AUD 300.000. In 2018 she was declared bankrupt. It is a huge scandal indeed that manufacturers and airlines still manage to cover/hide this problem and get away with it. It is a basic human right to have a safe working environment.

Lori testified before a US Senate Subcommittee, after a reported incident where both pilots were incapacitated and incapable to land safely. Over 2018 alone, 1.500 fume events were reported in the USA. Unions need to work together. FAA rules are not complied with. There is now a proposed law for a new reporting form, building in CO sensors, extra training of crew and incident investigation. The bleed air system is NOT safe, it must be designed out of future generation aircraft!

The industry is negligent on the subject of cabin air quality. Authorities lack authority and decisiveness and governments hide behind EASA. The Countess herself was affected by organophosphate poisoning due to sheep dipping (anti-parasite treatment). For most chemicals there is no safe exposure level, so how can concentrations be according to standards?

Corprorate denial shows four stages: consistent denial, then it has to be your own fault, then the government offers research with the objective to find nothing. Eventually the evidence is so great that action needs to be taken. Apparently we are moving slowly into this last phase, but there is still a long way to go. The Countess expressed hopes that airline marketing may help to convert “champion” airlines to attract more passengers by installing new filtration systems.