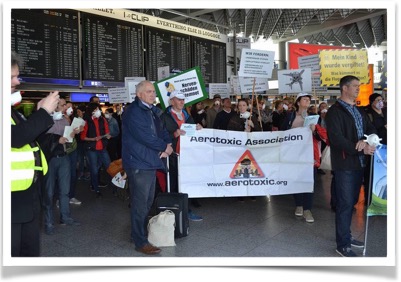 Goal of the demo was to bring this problem to the attention of passengers, public and politics.
The well organised demo was performed under (standard) police guidance. From the UK the Founder of the Aerotoxic Association, John Hoyte, was also present. Numerous very impressive testimonials were given by several cabin attendants and pilots,
who are suffering medical issues to an extent that prohibits them from performing their job.
Some of them are no longer able to take care of their families.

We also met a number of (still healthy) Dutch colleagues, who joined the demonstration
out of solidarity for their sick colleagues. There is a hig level of awareness.. “Tomorrow it might be my turn”,
as one of the Dutch Lufthansa pilots spoke. A Dutch stewardess was inquiring with Dr. Midavaine how to register
her wish to have an autopsy done after her death. This to support further medical research into the Aerotoxic Syndrome.
Without further research, generations to come will still struggle with this problem, and many more victims will be caused.

In Germany, the unions are deploying more and more activities: where UFO (Unabhängige Flugbegleiter Organisation) organised
a demo on March 28 at Frankfurt International Airport, Ver.di (Vereinte Dienstleistung Gewerkschaft) Hessen did so on July 14,
at Frankfurt and Munich Airport simultaneously. Another demo will be organised in Berlin, on September 4.

“Information is the key to your health”, as our slogan says… 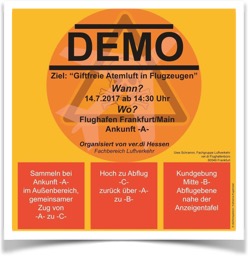 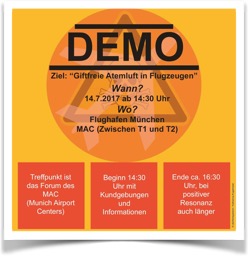