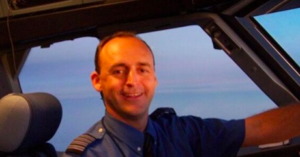 On July 31 2020, the State of Oregon (USA) Workers’ Compensation Board ruled in favour of Captain Andrew Myers.

Andrew Myers had been a Jet Blue Captain who was exposed chronically to contaminated air on the Airbus aircraft he flew followed by an acute oil fume event in early 2017. His case was supported by GCAQE Head of Research Susan Michaelis and former GCAQE Co-Chair Judith Anderson who on behalf of the Association of Flight Attendants (AFA) provided Captain Myers with invaluable support.

You can download the ‘Opinion and Order’ from the Oregon Compensation Board as well as the the final reply from his attorney Glen Lasken on the GCAQE News page.

This is an historic ruling in the USA and when you read the comprehensive ‘Opinion and Orders’ you will will note that the long held industry position of denial have been firmly discredited. Tribute should be given to Captain Myers, his family and his legal team headed up by Glen Lasken, for their determined fight for justice. You will also find the final reply document from Andrews’ lawyer to the court of great interest.

This US ruling comes twenty one years after the Compensation Court of New South Wales in Australia ruled, on 28 April 1999 in the Alysia Chew case. Alysia Chew had flown for Ansett and East West Airlines and had been exposed to fumes on the BAe 146 between January 1992 and October 1993. The New South Wales Compensation Court reviewed her claim that she was: “exposed to fumes, toxic substances and other irritants whilst carrying out her duties as a flight attendant” and ruled she had: “Suffered injury arising out of and in the course of her employment”. This was the first known legal case in Australia in connection with health effects from exposure to contaminated air on aircraft. We urge you to read the documents in relation to this case. (by Tristan Loraine)