Wednesday February 19 2020, the below article appeared in five regional Dutch newspapers around the city of Amsterdam: 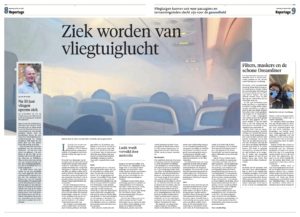 The article was written by journalist Frans van den Berg, and it once again brings the problem of contaminated cabin air to the attention of the public. Stichting Fly Aware was very happy to contribute to the article. Below follows the English translation.

Main Article: Literally getting sick from the air inside an airplane.

This has already happened to thousands of pilots, cabin crew and passengers. Maybe it is just the tip of the iceberg.

The fight for recognition of the occupational disease Aerotoxic Syndrome is getting fiercer all the time: more research and lawsuits. In the meantime, the company Pall/Aerospace was commissioned by Easyjet to develop a filter to filter toxic substances from the air. Boeing has already launched the Dreamliner, an aircraft that blows clean air into the cabin. A concept that Chinese aircraft manufacturers are now taking over.

It has been talked about for at least twenty years, but just like smoking, it takes a long time to prove its harmful effects. And just as with smoking, where not everyone gets cancer, not everyone in an airplane gets sick of the dirty air. Polluted air, yes, because the air that is blown into the cabin is not fresh.

After all, it is a pressurized cabin, so air always has to be blown in. That air is taken in through the engines, and that’s where the problem lies. Oil is also released in the engines, which becomes hot due to the heat of the engine and the vapours enter the cabin. This includes small amounts of harmful chemicals, including organophosphates such as TCP.

But regularly things really go wrong. The engine then leaks sufficient oil to cause smoke clouds entering the cabin. Such clouds can also be caused by de-icing fluids. Or suddenly there’s a ‘wet socks’ smell in the air. Such incidents are called “fume events”, and these do occur on a daily basis around the globe. Fifty fume events were reported at British Airways alone in November. American Airways even reported up to 1644 incidents over the whole of 2019, or five a day.

Thanks to social media, passengers will share such events immediately, often including video’s. There were incidents where passengers and cabin crew fainted, people had to go to hospital after arrival, and pilots were forced to quickly don their oxygen mask.

Not everyone gets sick.

That depends on how much of the substances have already been stored in the body and that in turn depends on previous exposures and on your DNA. These substances can cause damage to brain and nerve connections, which in turn can lead to various, often neurological complaints.

“If we do nothing, the current generation of pilots and cabin crew will also be sick in thirty years”, fears Ap van de Kraats, who flew for KLM and Korean Air for 36 years. At the age of sixty, he came home, sick. “But awareness among frequent flyers is also necessary.”

“A single flight can already destroy your life,” John Hoyte refers to a so-called fume event. Pilot Hoyte’s health declined completely after such an incident. “And the terrible thing is that hardly anyone does anything. Airline companies and manufacturers don’t take it seriously. Boeing had already been warned in 1999”, says the founder of the Aerotoxic Association.

The so-called Aerotixic Syndrome is not (yet) a recognized occupational disease. Nevertheless, sick passengers and crew worldwide are litigating against airlines, but for the time being, without results. Certainly, in the Netherlands, the trade unions are taking a wait-and-see approach – to the frustration of Ap and his wife, Annie de Vries. Together with Dr. John Midavaine, the couple founded “Stichting Fly Aware”. “I notice that everyone who is still employed by an airline may be worried, but also scared. They don’t dare to speak out against their employer. The airlines and aircraft manufacturers are fearing huge damage claims once the link between illnesses and the polluted air onboard is confirmed”, emphasizes De Vries.
According to Hoyte and the Kraats couple, that moment of claims is coming closer and closer.

More and more studies have been carried out (more than a hundred have already been published), conferences held and legal proceedings conducted. In Belgium, a major study is underway at this moment, where 70 people were examined. An attempt is being made to establish a link between brain damage and flight (aerotoxic) illness.

The Ikaros Foundation was set up last year, and focuses on research into prematurely deceased employees of airlines. So far fifteen post mortems have already been carried out, these involve specialist investigation. The Bussem physician Michel Mulder and brain scientist Dick Swaab are co-founders.

In addition, a European standard for clean air in the cabin is being developed. This would have to be complied  with by the installation of filters and detection equipment, among other things. But European aviation organization EASA has objections to this. The same EASA has been working for years on major research into toxic substances and their effect on the nervous system. In anticipation of this research, the Lower House of Parliament is still waiting for results, while the NAC isn’t making any progress either. This National Advisory Group on Cabin Air was set up by the Dutch government in June 2015,  with Dutch airline companies, trade unions and research institutes as participants

The Lower House of Parliament was promised annual reports, but these never came. “After the 2017 report, there have been several meetings; these reports are confidential because the internal deliberations did not lead to any advice. Commission President Biesheuvel stresses that there have been few developments in recent years. “We are waiting for the report from EASA, which is the biggest research ever done. That was supposed to be ready in three years, so this year. But I’ve been informed that there’s a delay.”

Fly Aware doubts the independence of both that research and the NAC. “After all, EASA is closely intertwined with the industry and the airlines. The NAC has only industrial stakeholders, not physicians and consumer groups.”

(Thanks Bearnairdine Beaumont  for your translation work)

Left side inset article: After 33 years of flying, suddenly ill

After flying for 33 years, KLM-pilot Ap van de Kraats was totally unaware of any health issues. In 2011 he retired, in accordance with the established labour agreement.

But he wasn’t too keen to sit at home at the age of 56. So as the opportunity came by to join Korean Air and fly the B747, he gladly accepted. All went fine, until end of July 2014, when he was studying for his half-yearly simulator checks. He couldn’t manage to go through the training manuals, suffered dizziness, loss of balance and severe headache. He also suffered a firm hearing loss, and reported unfit to fly.

A physician suggested the possibility of Aerotoxic Syndrome. “I had never heard of that before. The problem is that the symptoms resemble those of depression, burn-out or Parkinson’s disease. But in fact it is the result of an overdose of toxic substances. With food supplements I have recovered to a reasonable degree by now.”

Together with his wife and a doctor, Ap founded Stichting Fly Aware, a foundation that aims to collect and share knowledge about the Aerotoxic Syndrome, a so far unrecognised occupational disease. That is also British pilot John Hoyte’s mission. In his case things went wrong on New Year’s Eve 2002, when suddenly after engine start  a lot of smoke entered the cabin. He fell ill and hasn’t actively flown ever since. Reason for him to found the Aerotoxic Association in 2007. These days his health has improved a lot, and he is now living in the Netherlands.

Right side article: Filters, masks and the clean Dreamliner

Is there nothing to be done at all about this contaminated air then? Yes there is. Filters, masks and the “clean” aircraft “Dreamliner” from Boeing.

Fly Aware and the InternationalAerotoxic Team advise to wear special face masks during take off and landing. After all, those are the periods with the highest risk of toxic substances entering the cabin. It may look a bit unusual at first, but in these times of Corona viruses it will hardly stand out.

Manufacturers are also working hard to develop filters that will stop odd smells and toxic substances. Complicated, as this is not about ‘just a simple filter”. Besides that, any such equipment will need certification by  the aircraft manufacturer. And every aircraft type is different, too.

EasyJet is taking some initiative there. In Fly Aware’s view, that could very well be under the pressure of a court case which two French pilots filed against EasyJet.

EasyJet turned to Pall Aerospace for help. That company has also developed filters which are already in use to filter the recirculated air on board, which helps to quickly remove dirty smells after an incident. EasyJet will have those installed on its entire fleet of 331 Airbuses A320, which should be completed before the end of this year.

But toxic oil particles still have free access to the cabin. Commissioned by easyJet, Pall is now developing specialised filters to solve that problem. These have successfully been tested on the ground, and later this year they will be flight tested. After that those filters can also be installed.

What about KLM? Our national pride with over 9,200 cabin attendants and 2,800 pilots in the cockpit, and millions of passengers? KLM has already faced court cases by a pilot and a stewardess. Both claimed to be unfit for work as a result of Aerotoxic Syndrome. KLM pointed out that there is still no scientific evidence. Aerotoxic Syndrome is not a recognised occupational disease (yet), as the judge had to admit. The fired stewardess had opted to be scheduled only on the Dreamliner, but KLM did not consider that achievable for technical reasons.

Action groups consider Boeing’s Dreamliner as the only real solution for the problem. In this new aircraft, the air is not taken in via the engines, but through separate air inlets. Ergo, cleaner air, although there is no mention to the Aerotoxic Syndrome in the selling brochures, for fear of possible claims.

KLM, too, does not advertise a better air quality when promoting its new aircraft, of which 18 have been added to the fleet already. Besides that, KLM of course still has other types in service as well, like the B777 and B737.