Last week our partner Stichting Ikaros published a short article written by Michel F.A. Mulder MD. In his article, he discusses the possible spreading of the Coronavirus on board of aircraft, and expresses his doubts over the aviation industry claiming the air on board to be totally safe in this respect.

Based on our preliminary findings, there is no scientific evidence to support the thesis that flying is safe with respect to the spread of the corona virus in aircraft and the incidence of infections. 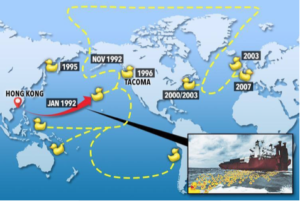 A couple of years ago a cargoship lost a container with plastic rubber ducks. The plastic ducks were eventually found in all corners of the world’s oceans. Research into this gave insight into the flow theory of the oceans.

In aviation we also have “rubber ducks” with which we can gain insight into the circulation of air in the cockpit and cabin of airplanes. This is in the form of metal particles, originating from bearings and turbine blades in aircraft turbines. Metal grinding of the bearings is carried away by the lubricating oil, which is pressed out over the gaskets by pressure differences and arrives at the compressor atomized.

Turbine blades, made of complex heavy metal alloys, are subject to relatively high temperatures and centrifugal forces. This causes the phenomenon “creep”. A slow stretching of the blades causes a constant drag against the inside of the metal housing of the turbine. This creep is mixed with the air in the turbine’s compressor and on all aircraft, except the “Dreamliner” Boeing 787, is at some point drained and blown into the cabin unfiltered. This bleed air is then partly recirculated and passed through HEPA filters.

What does this mean? HEPA stands for High Efficiency Particulate Filter. There are different mesh sizes available, ranging from EU 1 to 13. The smaller the mesh size, the higher the pressure drop over the filter and the earlier it is blocked. EU 13 is used in operating theatres. According to manufacturer CAMFIL, it cannot capture viruses. It can capture larger particles to which corona viruses attach electrostatically.

HEPA filters in aircraft are not changed every time a flight is turned around on the platform, but during (major) maintenance in the hangar. On the filter a layer of black dust develops where often mould ingrows with “pin point damage” of the filter itself. Small holes are created. It is unlikely that EU13 will be used, for practical and operational reasons.

Half of the air used in the cabin is recirculated. This is for fuel saving reasons. After all, draining air just before it enters the combustion chamber results in a pressure reduction, making less air available and therefore loss of propulsive power. 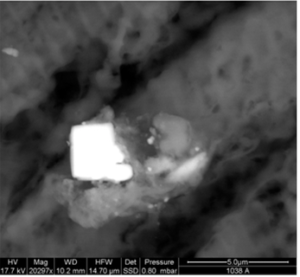 Broadly speaking you can say that “cabin air” consists of 50% supply via the bleedair from the turbine and 50% of the available existing used air. Of this mixture 50% is thrown overboard via the overflow valve, about 25% is directed via the HEPA filters and 25% remains in the cabin.

From what can I deduce this? We have found the fine dust of metal particles, from wear and tear within the turbines, inside the brains of two prematurely deceased airline pilots (1). These particles are surrounded by a layer of soot, originating from the deposition of lubricating oil components after passing through the compressor and are encapsulated after inhalation and arrival in the brain. The brain is not capable of breaking down these heavy metal particles. They are toxic and carcinogenic in nature. 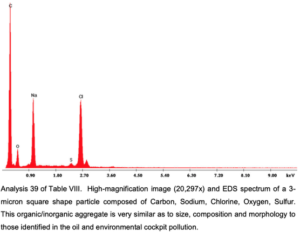 Michel F. A. Mulder, MD, medical examiner and former airline pilot. As chairman of the Ikaros foundation involved in the post mortem investigation of prematurely deceased cockpit and cabin crew.